You are here: Home / News / NWU Hosts Panel on Turkey as Trial Opens for 17 Journalists 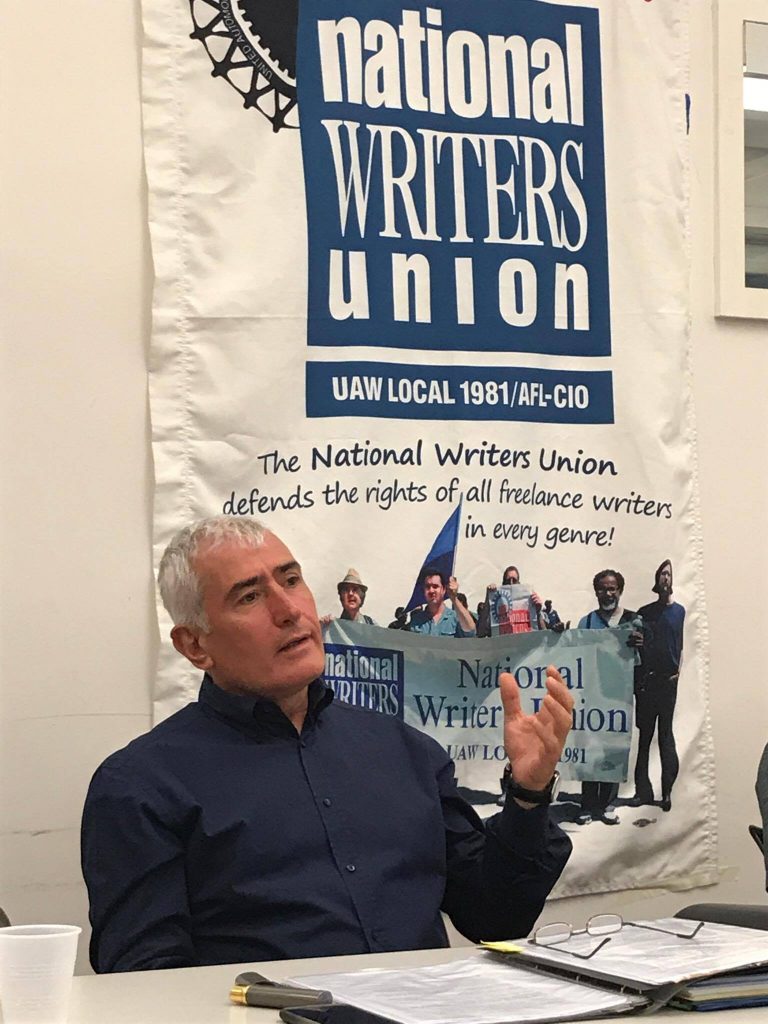 New York City, June 20 – Today NWU hosted a panel on the growing crises in Turkey and the Middle East. The panelsists included Sedat Bozkurt, a leading journalist at Fox Turkey, and Mucahit Bilici, a professor at John Jay College in NY and author of “Turkish Islam and the Kurdish Question.” The panel was moderated by Kumru Toktamis, a professor at Brooklyn College and an activist in Academics for Peace.

The panel was held as trials for 17 journalists began, accused of being part of the attempted coup last summer. In reality, they are on trial for criticizing the government. Below is the press release issued by the International Federation of Journalists (IFJ) in solidarity with those journalists on trial and with the 175 in prison awaiting trial.

Brussels, 20 June 2017 – The International and European Federations of Journalists (IFJ and EFJ) yesterday sent an observer to Istanbul to monitor the first trial against journalists accused of participating in the failed coup of last July.

The trial, which may shed light on how the courts will approach numerous cases concerning the right to freedom of expression and the right to a fair trial under the state of emergency, has amplified international concerns over press freedom in Turkey.

Raffaele Lorusso, General Secretary of the affiliate Federazione Nazionale della Stampa Italiana (FNSI) and an IFJ Executive Committee member, yesterday attended the trial of six journalists  Mehmet and Ahmet Altan, Nazli Ilicak, Fevzi Yazıcı, Şükrü Tuğrul Özşengül and Yakup Şimşek at the 26th Criminal Court of Caglayan Courthouse in Istanbul. They are among 17 people who appeared before the court yesterday on charges of links to the US-based Muslim cleric Fethullah Gulen, who the Turkish authorities say orchestrated the coup attempt.

All of them are held in pre-trial detention while journalist Tibet Murad Şanlı is free but subjected to judicial control and arrest warrants have been issued for the remaining 9 suspects.

The Altan brothers and Nazli Ilicak are detained since last September and face charges which carry a life sentence , including  “attempting to overthrow the Turkish Grand National Assembly”, “attempting to overthrow the Government of Turkey”, “attempting to abolish the Constitutional order”and “committing crimes on behalf of an armed terrorist organisation without being a member.” They were arrested after their appearance on a TV show aired by a pro-Gulen channel just before the coup where they reportedly intimated that the putsch was in the offing, media reported.

“Expressing your own opinion, informing citizens, disagreeing with the government aren’t subversive activities,” said Lorusso in a statement. “The journalists defend their innocence and the right to freely express their thoughts and criticism which is the basis of any mature democracy, as they reminded the court . This is not a normal process but an attempt to pass journalism off as a crime.”

In the court there were also representatives of TGS, one of the IFJ/EFJ affiliates in Turkey.

“Unionism is about defending professional journalists’ rights no matter what their opinions are,” said TGS President, Gökhan Durmus. “TGS was together with the FNSI General Secretary attending the press trials of Altan brothers, Nazli Ilicak and 15 other journalists and we are calling together with IFJ and EFJ for the release of all of them.”

Journalists’ lawyers fear that the trial is going to be long and could take at least 10 more months in which they will be held in prison.

“We call on all the international organisations to join our efforts and do their utmost in lobbying the Turkish authorities for our colleagues to be released as a matter of urgency,” said IFJ President, Philippe Leruth. “Otherwise injustice would win and Erdogan’s government would be responsible for a definitive rift between his government and the European Union and our non-negotiable values of freedom of expression, justice and tolerance.”

On 14 June, the European Court of Human Rights wrote to the Turkish government requesting its response to a number of questions to determine whether the human rights of seven detained journalists, including the Altans and Nazli Ilicak, have been violated due to the long-pretrial detention, media added.

At yesterday hearing, there were also other observers from other international human rights and media organisations such as Committee to Protect Journalists (CPJ), International Press Institute (IPI), Pen International, Human Rights Watch (HRW), Article 19, Amnesty International, Index on Censorship and representatives of the consulates of Sweden, Great Britain, Denmark, Germany and Norway.

So far, 165 journalists remain behind bars in Turkey. IFJ, EFJ and TGS have launched a campaign based on sending solidarity postcards to encourage them and asking for their immediate release.