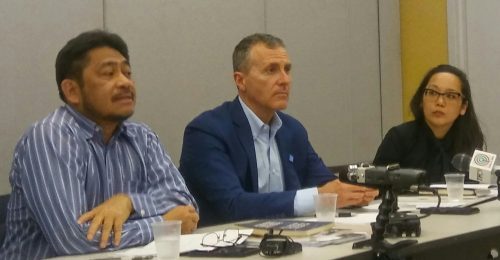 New York City, 1/22 – Tonight the Fil-Am Press Club of New York (FAPCNY) kick started 2018 with a two-hour forum and discussion on “How do you protect human rights in the Philippines?” There are no  easy or quick answers.  Human Rights Watch Deputy Director for Asia Phelim Kine and Fr. Albert Alejo, SJ tackled the question and Olivia Canlas, Esq. was the responder.

The community forum was hosted by FAPCNY vice president Cristina DC Pastor and Noel Pangilinan of the Asian American Writers Workshop, and was attended by about 50 participants. FAPCNY organized the forum in partnership with the feminist organization AF3IRM.

Kine said the extra-judicial killings in the Philippines have become so staggering in such a short span of time (one year since the Duterte presidency), putting it in a category alongside troubled countries like Sri Lanka, Ethiopia and Yemen. “There is a triple human rights calamity,” he said, and it looks like it won’t stop anytime soon.  Human Rights Watch has estimated the number of killings at 12,000 mostly poor people who are either suspected drug addicts or small-time drug dealers.

Kine added that with a generally corrupt police department and a dysfunctional government to prosecute assailants, Pres. Duterte’s war on drugs may not actually solve the problem. He added that there is a “disconnect” between the brutal bloodshed and the popularity of Pres. Duterte.  NWU President Larry Goldbetter, who attended the forum, reflected that the situation in the Philippines is similar with that of the US, where many thought that Pres. Trump would be the answer to their economic problems. “There is that disconnect here too.”

Fr. Alejo, a visiting professor of ethnography at the Pontifical Gregorian University in Rome, said the extra-judicial killings in the Philippines are not unique to the Duterte presidency, who continues to enjoy high approval rating. Extra-judicial killings date back to the time of Pres. Marcos and subsequent presidents. He emphasized that as Mayor, Duterte “cleansed” Davao City from various armed groups and bandits,  a “model” he has now implemented on a national scale.

“There is no one single analysis as to the cause of the disturbing realities of our society,” Alejo said. “I invite everyone to analyze reality using various perspectives: history, politics, economics and culture.”

Someone from the audience asked, “Does the society have a battered woman syndrome, who loves her abuser despite the abuses?” Alejo answered, “We also consider looking at dark psychology (of leadership) and look into layers and layers of hurt, fear, and distrust experienced by the people, hence they would look at someone who could represent their aspirations.”

“People are wary of violence perpetrated by the military, the police, armed groups, and the NPA. Let us all be truthful here,” he said when asked to comment about Duterte’s intensified “fascist” rule and open allegiance to China. AF3IRM co-founder Ninotchka Rosca noted that events in the Philippines are often contrived in order to consolidate local political blocks.

It was very difficult discussing the fact that there seemed to be no early end to either the killings or to Duterte’s popularity.  Olivia Canlas urged to audience to, “inhale courage and exhale fear,” in order to persist in protecting human rights.

Kine noted that the international community, through the United Nations, for instance, could call on the Duterte government to stop extra-judicial killings. Given the magnitude of the killings, and the seeming dysfunction of the systems of government in the judicial and legislative branches, the people and the international community must exert pressure to stop the killings, he said.

OSM! blogger Vanette Colmenares asked if federalism, which is being tackled right now by Congress, would be a way to solve the ‘dysfunction of government systems’, Alejo said that federalism is only theoretically attractive but has failed in the Autonomous Region of Muslim Mindanao and the Cordillera Autonomous Region. “So why would we apply that in the entire country?” he queried.

Boyet Loverita, a photo-journalist of the GMA Network, noted that national Police Chief Gen. Ronald dela Rosa said in a recent interview that government will now change its “shoot to kill” policy and intensify the drive to clean up the ranks of police. Fr. Alejo said that would be a welcome development. “In fact, cleaning up the police…[should] have been done before this drug war campaign,” he said.