You are here: Home / News / NWU Boston Celebrates Its Authors 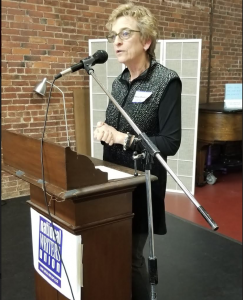 Sunday afternoon, January 28th, the Dance Complex in Central Square, Cambridge, was the place to be for writers and friends of writers. That’s where NWU Boston held our annual Book Party to celebrate members who’ve published books in the previous year.

This year Amy Hoffman (The Off Season); Patrick Kennedy (Bricklayer Bill: The Untold Story of the Workingman’s Boston Marathon); Jeannette de Beauvoir (Death of a Bear, Murder at Fantasia Fair, Our Lady of the Dunes); Willie Wideman-Pleasants (Stretching the Truth); and Janice Zarro Brodman (Sex Rules!) read short samples from their works.

The event also includes a keynote reader, and this year we were delighted to feature Anita Diamant, author of a number of novels, including The Red Tent,  a first-person narrative about the Biblical character Dinah, who was the daughter of Jacob and sister of Joseph. In 2014, the cable channel, Lifetime, created a two-part mini-series based on the novel.

Diamant also writes nonfiction that addresses Jewish history and culture, and her talk focused on her book The Jewish Wedding, which first appeared in 1985. She’s since published two updated editions, one in 2001 and another last year. She gave a fascinating and timely account of how subsequent versions have reflected changes in the Jewish community. For example, the 1985 edition did not address the issue of same-sex weddings, whereas the current one offers detailed guidance for same-sex couples planning a traditional Jewish wedding.

A long-time, committed member of the National Writers Union, Diamant ended her remarks with a strong statement of support for labor unions, and encouraged those in attendance to keep fighting for social justice and the rights of working people everywhere.