You are here: Home / News / NWU at the Bronx Book Fair 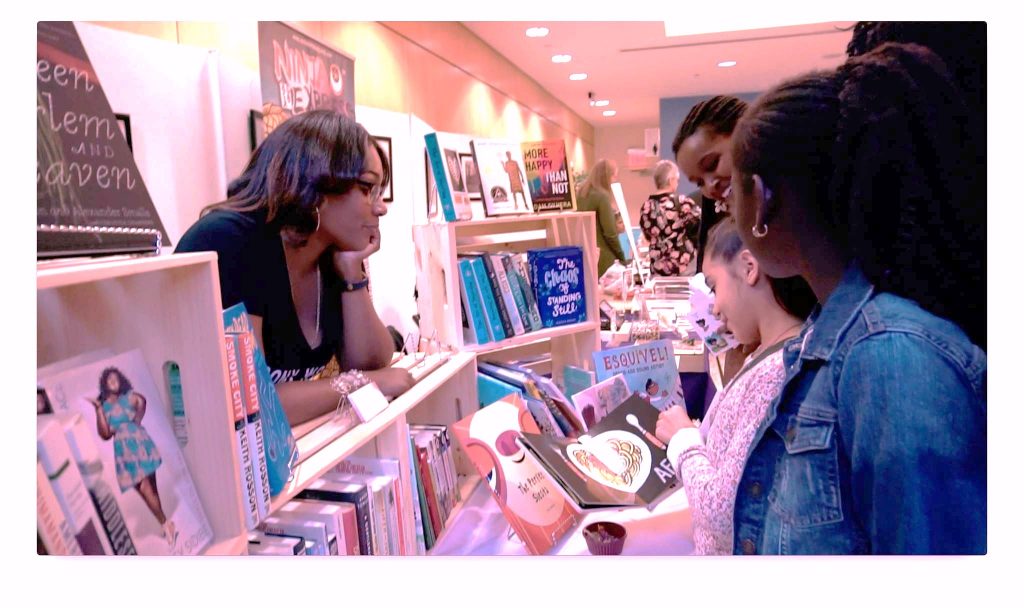 Bronx, NY May 5 – When I emerged out of a cab in front of the Bronx Library Center to attend the Bronx Book Fair with members of the National Writers Union, it stood out like the Pyramid of Khufu (Giza) in Africa, regarding its outstanding architecture and its dignified demeanor compared to the surrounding buildings. I knew that I was in for an exciting and enjoyable event.

The place was packed with authors who vended their books on shared tables. Members of the NWU Steering Committee managed a workspace which offered attendees literature, buttons, and sign-in sheets; over forty persons signed the pages.

Years ago when the NWU attended BBF, there was a minuscule audience. Now, under the leadership of Lorraine Currelley, the first woman Executive Director, the populace Saturday mushroomed to about 500 attendees. Currelley buzzed around the area like a worker bee spreading pollen to nourish a hive’s family, so engaging, smiling, answering queries, etc.

I received a pleasant surprise to learn that the book fair was celebrating Marc W. Polite, Founder and Editor in Chief of Polite On Society. He is also the winner of a Best Blog Commentary Award from the New York Association of Black Journalists. He interviewed me a few years ago during the Black Writers Conference at Medgar Evers College while I managed the National Writers Union table.

I had a wonderful conversation with Richard Kigel, author of the definitive biography Heav’nly Tidings From the Afric Muse: The Grace and Genius of Phillis Wheatley. His stand was next to the NWU contingent. I talked the poor guy to death about Wheatley, the enslaved African poet who gained prominence during the colonial era. Richard is not only a preeminent scholar, he’s a gentleman; there were not enough seats at the NWU table for Susan E. Davis to sit, so he allowed her to park in his chair for a much-needed rest.

The NWU offered a well-attended presentation, Protecting Your Literary Work, in the auditorium, which featured Susan E. Davis and Wendy L. Wilson. I moderated the panel conversation. Wilson, the former Managing Editor of EBONY Magazine and the recipient of the 2010 New York Association of Black Journalists Award in the Magazine Public Affair category, chronicled the NWU’s struggle to force EBONY to pay more than 40 writers the $80,000 that is owed them. While the magazine has promised on paper to pay the scribes, only the first quarterly check for about $14,000 has gone out, and Wilson’s payment is not due until the 3rd Quarter payment. The distinguished journalist said meanwhile she has bills to pay and won’t be satisfied until she receives a check from EBONY with the correct agreed-upon amount and it doesn’t bounce.

Davis, NWU national contract advisor and copyright expert, offered wise advice: “Copyright your work with the Library of Congress Copyright Office.” She rebuked the myth of the poor person’s copyright. “Forget about putting your work in a self-addressed envelope and sending it to yourself registered; that does not protect your work and will not stand up in a court of law.” She also advised writers to avoid vampire publishers who offer all rights contracts to own their works and to be cautious of internet pirates who work 24/7 to hijack writers’ labor.