Over nearly a decade, Netroots Nation has grown to become a powerful force in promoting the Democratic Party. It serves as a platform for community activists, labor organizations, and even presidential candidates.

With a reputation for compelling content and boisterous voices, Netroots 2015 descended on the Phoenix Convention Center in Arizona’s capital city last month, and it did not disappoint.

Organizers seamlessly connected politics, activism, and music, including a riveting performance by emcee and Hip Hop activist Jasiri X, who called for “freeing minds one rhyme at a time.”

“It was cool to see Netroots embracing socially conscious artists such as Immortal Technique, Mystic Blue and myself,” Jasiri X said. “I would definitely like to see that continue in the future.”

Nearly 100 people stopped by the National Writers Union’s booth at the convention center, with three people joining NWU on the spot: Jenna McLaugin, who said she never knew our organization existed; Francine S. Eastwood, who told me that she always wanted to join; and lapsed member Katrina Blomdahl, who missed being in the NWU, and is glad to be back. Each of them received a free NWU T-shirt.
One woman who had signed our book the first day came back around after we’d run out of all the “good candy.” She said: “I was just wondering if you guys have any more of those writing-block packages any more. I was in Detroit last year when you were giving them out with your little spiel. I was hoping to get another one. I guess it does keep me from getting writer’s block!” I had to break it to her that I hadn’t brought any with me.

Inside the main convention space, Massachusetts Senator Elizabeth Warren fired up the crowd by calling for widespread reforms, including breaking up Citigroup and other big banks; increasing minimum wage; and providing better protection for black and brown lives.

The latter proved a sticking point for former Maryland Governor Martin O’Malley. Protesters interrupted the presidential candidate’s address by asking him to clarify his position on the #BlackLivesMatter and #SayHerName movements, the latter referencing the death of Sandra Bland in a Texas jail after being pulled over for allegedly failing to signal a lane change. 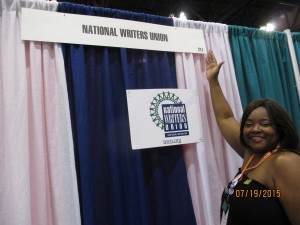 Tia Oso, a representative of the #BlackLivesMatter Movement, was among those expressing outrage with O’Malley’s decision not to call attention to the recent spate of attacks on unarmed African Americans. She noted, “Black communities are experiencing a state of emergency, and racist sanctioned violence is taking a Black life every 28 hours. It is time for everyone in our country to take notice.”

On the heels the audience’s response to O’Malley’s comments, Vermont Senator Bernie Sanders, also a Democratic presidential candidate, seemed ready to tackle the issue head on when he took the stage:

“Of course black lives matter!” he declared, but then suggested that he wanted to focus on his “key talking points” before doubling back to the black-lives issue as the crowd grew even more restless.

They confronted him about his position on criminal-justice reform and institutional racism, demanding to know when their concerns would become a top priority, and what he planned to do about them. After a while, Sanders tired and the protesters left the auditorium, marching through the convention center chanting, “Black Lives Matter,” and “Say Her Name.”

While some walked away disappointed, others seemed pleased that they got to raise their voices on student debt, immigration reform, gun laws, drought, climate change, women’s rights around the world, and LGBTQ awareness.

“It’s like we live in two Americas,” Oso asserted, “with different laws and rules for Black people. We planned a Netroots town hall to bring progressive community and presidential hopefuls [attention] to the serious issues of structural racism.”

Queen Muhammad Ali and her husband attended Netroots as vendors, selling a magazine that they publish. She’s Pacific Islander whose mother is Samoan and father is black. Ali is shooting a documentary entitled, “The Last Matai,” about indigenous peoples’ history in American Samoa.

“My great-grandfather, Paramount Chief Tuli Le’iato, was the first secretary of Samoan Affairs,” she said, noting: “His letters are displayed in the John F. Kennedy Presidential Library and Museum.”

While she noted that she had never been particularly political, “After this experience,” she said, “I feel it’s my duty to be more involved.

The NWU plans to participate in next year’s Netroots Nation in St. Louis, MO, where I’ve been invited to teach a Master Class, possibly on some aspect of public relations. I’m excited about the opportunity, and will soon submit a proposal outlining the course.

Photos courtesy: (Top and middle)  NetrootsNation.org; (bottom) the author and member, Alecia Goodlow-Young,  who covered the event for the NWU.