You are here: Home / News / Minnesota Gets Tough on Wage Theft 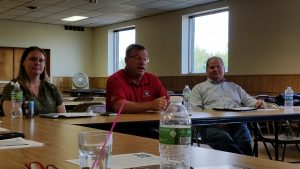 It is frightening to imagine showing up for work, shift after shift, for a paycheck that may or may not materialize until days or weeks after it has been promised.

How difficult it must be to repeat that promise to a daycare provider while dropping off a child on the way to work, standing in the grocery store line praying the total will match the money in your wallet, or rationing gas so you will have enough to get to work.

Wage theft is real in the land of nice. An estimated 40,000 Minnesota workers fall victim each year to theft that robs workers and families of their dignity. It was one of the 2019 legislative priorities recently outlined night in Cloquet, MN, during a listening session sponsored by the Minnesota AFL-CIO and the Northeast Area Labor Council.

The following priorities are critical in providing dignity, justice and freedom for working Minnesotans, according to Brad Lehto/

Thanks to my state representative, Mike Sundin, and a push by DFL lawmakers, the Minnesota Wage Theft Law took effect on July 1. Workers now have a legal right to be paid what they’ve earned and on a regular basis.  Workers are protected by this new law, and employers are subject to it without exception.

The Minnesota Department of Labor and Industry has new powers to enforce civil wage theft violations, the Minnesota Fair Labor Standards Act, and the Prevailing Wage Act. The Attorney General has authority to identify violations and assign investigators to ensure that the new law is enforced.

Unfortunately some of the priorities on the list were not met, including the 40-hour work week. Did you know that Minnesota is the only state with a 48-hour work week? As some of us learned during the listening session, people who work for any employer that operates entirely in the state of Minnesota are not eligible for overtime until after 48 hours of work.
As one attendee exclaimed, “that’s one more day of work!”

And now it appears it will take one more legislative session to bring Minnesota’s work week in line with the rest of the country and complete the AFL-CIO list of priorities it believes will provide dignity, justice and freedom for all working Minnesotans.