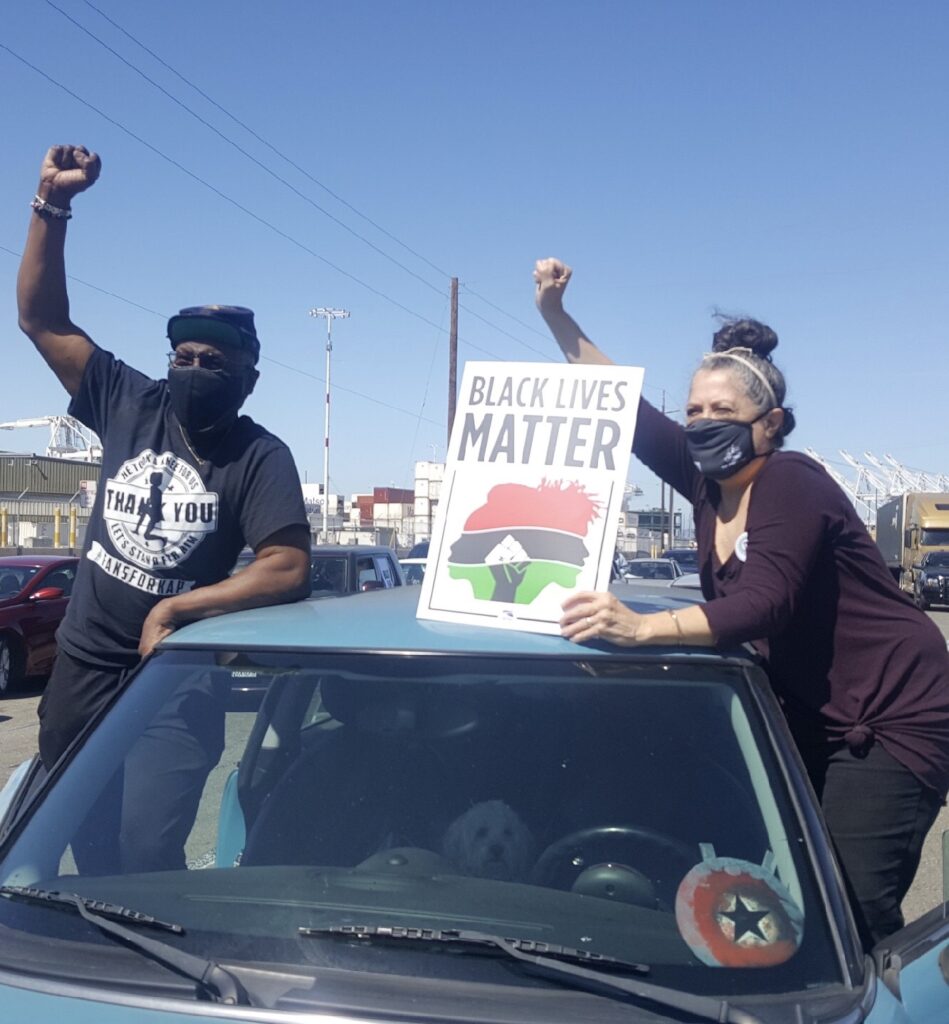 We all have a stake and so much to gain in the rooting out of white supremacy.

This is a moment for holy uprising.

We have all been the beneficiaries of Black women’s brilliance and grace, whether we know it or not.

Trent Willis, President of ILWU Local 10 welcomes us to the Port of Oakland: 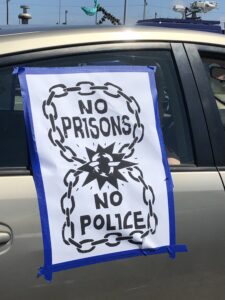 “I’m happy to see you all my brothers and sisters out here from the ILWU, from the community, from all of the labor organizations and unions that joined us here today, welcome to the port of Oakland. I just want to officially welcome everybody from the International Longshore and Warehouse Union Local 10 — our heartfelt welcome to all of you — in our effort to once and for all, brothers and sisters, end systemic racism in the United States of America! … My brothers and sisters in the ILWU, all the local 10 members here, local 34, 75, 91 and IBU {Inlandboatmen’s Union} — thank you for coming out.”

Zigi Lowenberg: “What brought you out today to the demonstration?”

Mia Chambers: From a 17 year-old fighting for the ERA and a woman’s right to choose, to racial justice, to equal rights for the LGBTQ community, to protesting too many wars … I have always taken to the streets to make my voice heard. I’ve felt community and solidarity in activism—that I am not alone and that people united can make change. Today was important for me to show solidarity for BLM and my outrage over the recent racist events in this country. That enough is ‘ffs’ enough! I particularly wanted to show support for the unions shutting down the ports for my husband who isn’t here to march but would have been out here with us as he truly supported and believed in the power of unions. This one was in memory of my artist-comrade-union-supporter sweetheart, Rick Arnitz.

Raymond Nat Turner: I wanted to show my solidarity with the ILWU, the vanguard of the labor movement. Also to get a sense of what the masses were up to. I was totally impressed. The numbers, the diversity in terms of ages — in particular mostly younger people. Those were younger people over twenty, there was a contingent of activists even younger who were organizing another event at deFremery Park {aka Lil’ Bobby Hutton Park.}

To see the ages, the ethnicities, and so many Euro-Americans out there operating from a very different position than I’ve seen in the past, coming from a higher level of consciousness, commitment, and militancy — is important to me. So it was extraordinary for me to see that. That was a new feature. And then there’s another level of creativity in terms of signage, figuring out how to protest under the conditions of the pandemic, practicing social spacing, and using cars as another tool for protesting. Using their horns, multiple signs {adorning cars} was a very creative use. Whereas the Right and the police have used their vehicles as lethal weapons against the people; striking them and as in Charlottesville, killing an activist.

My big takeaway is that the numbers, the energy, the diversity, the commitment, the consciousness portend a real shift where people have the potential to really push this thing! They have demonstrated the creativity to really transform society. And I’m not saying it’s going to be instantaneous. But they are flexing their muscles and showing in an embryonic form that they can run this thing — it is there. And what is incontrovertible is there will be no return to normal.

“Shutting down production is a strategy for demands. Ultimately the reason the police are brutal is to protect capital.” —Boots Riley, Boots & The Coup

Boots Riley goes on to comment: One victory in Seattle is that the labor council booted out the police union. Unions aren’t about the union heads, they are about the rank and file — the ones that can stop the work. And what’s more to the point in these times is that it’s going to come from the 93% of the workforce that isn’t organized into unions. Just like at other times in history, it is the rank and file that pushes forward. We got to look at where our power is. We are the ones that create wealth — that’s when we recognize what our power is. We need parties and organizations — not the non-profits dependent on funding — that have the ultimate goal of changing the fundamental system we are under.

Angela Davis, speaking at the Port of Oakland, Juneteenth 2020:

“Whenever the ILWU takes a stand, the world feels the reverberation. We remember your stance against the internment of the Japanese-Americans in the 1940s. We applaud the fact that you stood with Martin Luther King and Civil Rights activists in the 1960s. We know that you radicalized the struggle against South African apartheid in the 1980s. And we thank you for supporting Mumia Abu Jamal; for solidarity with the anti-capitalist Occupy movement; and for your resounding ‘no’ to the racist state of Israel; and for your expressions of solidarity for those who call for justice in Palestine.

I was thinking the other day, that if I had not chosen to become a university professor, my next choice probably would have been to become a dockworker or warehouse worker, in order to be a member of the most radical union in the country, the ILWU. Thank you for all of your contributions to our struggles against racism and capitalism, against racial capitalism. And thank you especially now, for speaking out against the brutal racist murders of George Floyd, Breonna Taylor, Ahmaud Arbery, Rayshard Brooks, and the many others whose lives have been claimed by the structural violence of racism. Thank you for shutting down the ports today on Juneteenth, the day we celebrate the end of slavery, the day we memorialize those who offered us hope for the future. And the day when we renew our commitment to the struggle for freedom. Thank you ILWU for shutting down the West coast ports today. You represent the potential and power of the labor movement. Hopefully this action will influence other unions to stand up and say ‘no’ to racism, and ‘yes’ to abolishing the police as we know them. ‘Yes’ to re-imagining the meaning of public safety and security.”