You are here: Home / Journalism Division

The Journalism Division includes freelance journalists of all types; from stringers to feature writers to editors; for both print and the web. Freelancers in the digital age have seen their rates plummet. In the early days of writing for the web, writers bought the argument that readers demanded their content for free and the platforms were having trouble monetizing it. This is no longer the case. The revenue streams for digital content have grown over the last fifteen years while the rates that writers earn have mostly stagnated. A generation of writers have come of age believing that their writing is worth ten cents, five cents a word – many have even agreed for years to write for free in exchange for “exposure.” Our mission is to bring together freelance writers so that we can marshal our collective knowledge and financial resources to challenge this status quo. We need to research and define new standards for freelance journalism in the digital age and to promote and enforce those standards among our peers. We can have an impact, but we need you to join us. Our dues can help fund larger national initiatives to raise standards, but more importantly our members’ knowledge can help us map out the strategy and tactics it will take to win. Join the NWU Journalism Division today and get involved!

There are links on the right-hand side of this page for joining our Journalism Division Email List and for purchasing IFJ and NWU Press Passes.

NWU has written agreements with a number of publications that detail standards and procedures for their freelance writers. For more information on these agreements follow the links below: 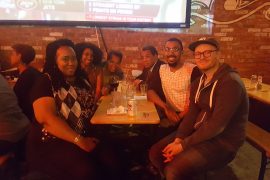 On November 1, lawyers for NWU and the Ebony Media Organization finally met in a Cook County courtroom. At issue is the $80,000 owed to the 48 freelancers who are being represented by their union. The following night, about a dozen Ebony freelancers and some NWU reps met and got to know each other at […]

Did you know that under the new Freelance Isn’t Free Law, a deadbeat client could be forced to pay double damages and legal costs for stiffing a freelance writer? NWU played a big role in helping to pass the law, making New York City the first in the country to make stiffing freelancers a […]

UPTOWN Magazine–a national publication with regional editions in Atlanta, Charlotte, Chicago, Detroit, New York, Philadelphia, and Washington, D.C. –has not been paying all of its freelance writers. Some writers remain unpaid since October, 2014. Together five writers, now represented by the National Writers Union, are owed $18,825 for work published by UPTOWN over the past three years. The NWU has tried repeatedly […]