Delegates to the 30th World Congress of IFJ, Tunis, June 2019

As the sun set over the capital of Tunisia, some 300 journalists from around the world – all members of the International Federation of Journalists (IFJ) – marched down the Rue des Etats Unis and cried out: “Solidarite.” 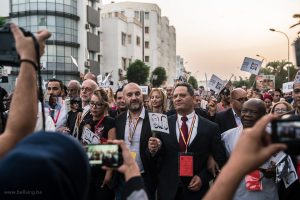 In their hands they held paper flags emblazoned with the faces of slain journalists – comrades who lost their lives simply because they were doing their jobs and trying to tell the truth. Military and city police flanked the marchers as they held banners and waved at the growing crowds. Tunis, which birthed the revolution commonly known as the Arab Spring, is no stranger to protest. The people watched and some of them chimed in. Voices from those apartments, and from mint tea cafes on the streets, rose up to join the journalists, who eventually walked to the headquarters of the Tunisian Association of Journalists to stage one final battle cry.

It was an emotional moment, considering that 271 journalists have been killed in the line of duty since the last Congress. It was also an emotional moment because people of all countries – from Palestine to the United States and from Brazil to Mongolia – stood together for the common good. And that was just the beginning of the 30th annual IFJ World Congress, held at the Grand Tulip Hotel in Tunis, Tunisia from June 11 through 14, 2019.

Perhaps best described as a United Nations of journalism, the conference was full of multicultural politicking, hours of voting and lots of making a difference. The main themes of the conference encompassed approving a new code of ethics for journalists, gender equality, the installation of a new Gender Council for the IFJ and a move to seek the release of imprisoned editors, photographers and writers all over the world. A new president and executive committee were elected, along with board members.  And along the way, several motions were introduced, voted upon and approved that are intended to usher in greater equity and equality for scribes of all genders. The United Stated delegation introduced four motions alone that each were voted in. And in an unexpected twist, freelance journalists from Spain, Brazil, England, Germany and the United States got together to exchange international ideas on contract agreements, and payment structures.

This was the first time the Congress was held in Africa. 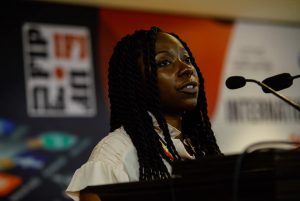 This was also my first IFJ conference and my second attendance at a convening of the Gender Council. Traveling 18 hours from Chicago, with a transfer in Paris, to get over to Tunis – which is the land where Hannibal and his elephants once lived – was both a professional and intellectual coup d’etat. I met with editors, writers and lawyers who worked the world over to improve conditions for professional storytellers, and to improve our pay and protect our author’s rights. I sat to coffee with the journalists from Sudan and learned more about the crisis impacting their country and the new regime’s decision to stop all journalistic work for a time. I sat to breakfast with journalists from Spain, who last year launched an initiative to make work safer for female journalists who are harassed by the men in their shops. I shared a taxi ride – or two – with members of the Tunisian Journalists Association and listened to an hourlong panel on the state of journalism in the Middle East, after the Arab revolution. A member of the Syrian Journalists Association walked me through the locations of bombings on the infrastructure of Syrian television and radio stations. The president of the Mexican federation discussed challenges to reporters there – where more journalists wind up “disappeared” than in any other country that we know of. The Brazilian delegation talked with me about how racism and sexism combine to make a dangerous workplace at times.

There were sessions on trade union efforts on each continent, long discussions on the best practices for organizing and lots of ideas on preserving author’s rights and how to organize those who work in the digital media.

My big takeaway? We are all doing the work, and our work is often very similar, but there is always more work to be done and we can – and should – do it together.

NWU President Larry Goldbetter caucused with several countries to ensure that the NWU’s proposed motions would be adopted without a fuss at the 30th annual IFJ Congress in Tunis. Goldbetter and this author took to the podium several times to describe why the world’s unions should support the NWU’s fight for the “moral rights” of authors and oppose so-called “Controlled Digital Lending” by the Internet Archive and libraries. The NWU also introduced and passed a motion supporting the release of Salvadoran journalist Manuel Duran motion supporting the release of Salvadoran journalist Manuel Duran (who is being detained by ICE in Louisiana) as well as the Central American refugees currently blocked from entering the U.S. A  motion demanding the right to collective bargaining for all freelancers was also introduced by the NWU and approved by the Congress.

The Congress also made global news, as the president of Tunisia stopped by for a candid discussion, and the conversation on journalism after the Arab Spring made headlines on the local television channels.