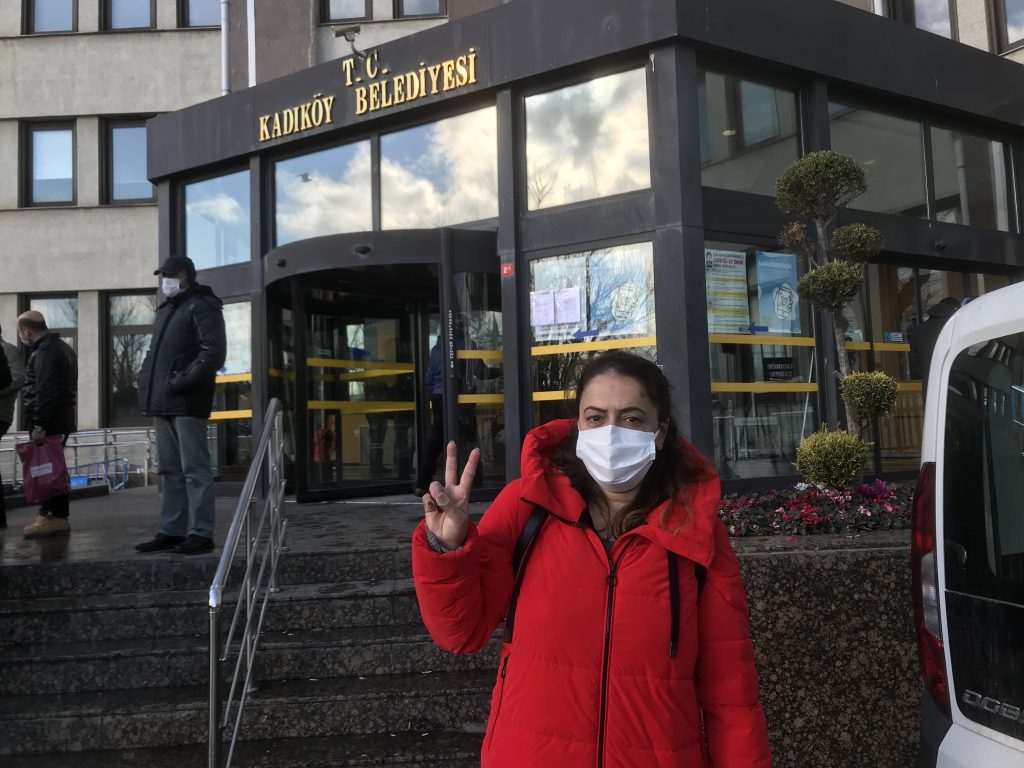 Istanbul, TURKEY – On February 15, 2,300 Kadıköy municipal workers went on strike against the low wages offered by the borough administration after a long five-month collective bargaining process. As a journalist and member of NWU, I was there on February 17, when hundreds of the striking workers gathered to demonstrate in front of the municipal building.

On February 18, the strike was abruptly called off by the central leadership of the Confederation of Progressive Trade Unions of Turkey (DISK*) General Service Union (Genel-Is) after a secret meeting with the president of Kadıköy municipality, Şerdil Dara Odabaşı. Workers knew nothing about the meeting and reacted by saying, “We don’t recognize the agreement that was signed without us.” (Evrensel Daily)

Cem Karasoy (43), a local union representative, said that the workers were not just demanding a wage hike, but also improved working hours, and worker involvement in decision-making processes. He said street cleaners are always disrespected. “We are garbage collectors for about 360 days in a 365-day year. But when it comes to the bargaining, we become cleaner ‘Brothers and Sisters.’” He said that some workers were fired for not answering when a supervisor spoke to them.

Necla Özülkü (39), a striking office worker, was very excited and empowered by the strike and said that almost all workers are participating. She said that they want a free nursery for working mothers and a day off for March 8, Working Women’s Day. She added the main need was for a satisfactory wage increase to meet the rising cost of living.

Workers also had to struggle with a public smear campaign and strike breakers, thanks to the Turkish Social Democrats and scabs sent by the Istanbul city municipality. On social media, the Kadıköy municipality falsely claimed that they offered a 38% wage hike, to make the striking workers seem greedy and turn public opinion against them.Many people began to question why the workers were rejecting such a generous offer.  At the same time, Ekrem İmamoğlu of the social democratic Republican People Party (CHP), sent scabs to help defeat striking workers.

Despite this, many students and workers from other sectors and socialist parties showed solidarity with the workers. After the strike was called off, Sema Barbaros, the Istanbul chair of EMEP (Labor Party of Turkey) said, “We will continue to support workers until they can get what they demanded initially. We will expose the union leadership.”

Since February 15, workers meet in front of the municipal building to demand a wage that keeps up with inflation. It appeared that municipal workers in Maltepe, Ataşehir, and Kartal might also go on strike. Maltepe workers had called a strike for February 22, but the union’s central leadership stopped them. As in the Kadıköy municipality, the Maltepe president spread misinformation about what the workers were offered while the Istanbul city municipality sent the scabs to cross the picket lines. In Kartal, the union leadership signed a deal before the workers could go on strike.

What is unique is that all of these municipalities are controlled by the Opposition Alliance’s** leading party the CHP. While it is recognized as the main opposition party to the Erdogan government, it shares much of AKP’s anti-worker neoliberal policies. These strikes show that the CHP is not a genuine opposition party when it comes to the workers’ rights. The leadership of the DISK General Service Union is mostly affiliated with the CHP, like their US labor counterparts with the Democratic Party. The strike wave of municipal workers in Istanbul, and the responses of CHP and DISK will shed light in what Turkey might look like for workers in places that are no longer under AKP rule.

*DISK: Devrimci İşçi Sendikaları Konfederasyonu. The literal translation from Turkish is “Confederation of Revolutionary Workers’ Unions.” Yet, they prefer to use “Confederation of Progressive Trade Unions of Turkey.”