You are here: Home / News / In Memory of Lynn Stewart 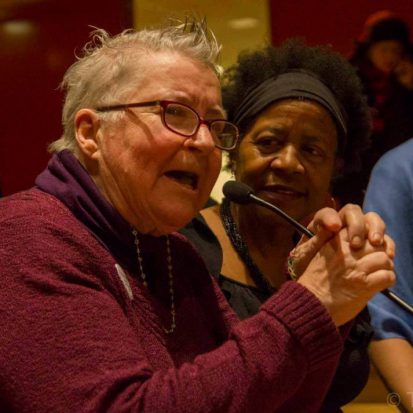 “Did you say I’ve got a lot to learn

Since this is a perfect spot to learn—

Are Mothers older than daughters?

If you die, do you come back the next day?

We wake with watch hands

Saying nothing untrue at 9

Our Valedictorian checked out,

But never quietly into the night!

Her they’re hearing in creaking

Talking back beneath their boots and

Never Bowing Down Or Sucking Up”

Amplifying power to the people

signaling us to step up, strap on our balls, take

Signaling us to become

Hard-wiring ourselves for happiness, joy, love:

Signaling us to become

Dancing in the street to Brass Liberation Orchestras;

For we know we can win

We know we can win

We know we can win

Lynn Stewart. the People’s Lawyer, died on March 7. She was arrested on April 9, 2002, on charges of helping pass messages from her client, Sheikh Omar Abdel-Rahman, an Egyptian cleric convicted of masterminding the 1993 World Trade Center. She was convicted of conspiracy and providing material support to terrorists. Originally sentenced to 28 months in prison, she was re-sentenced on July 10, 2010, to 10 years, an unprecedented move, for showing “a lack of remorse” after her initial sentencing. She was granted a “compassionate release” from prison three years ago due to Stage-4 breast cancer.  She was a fighter to the end.

Many characterized her conviction as an attempt to instill fear in those who seek to legally defend Arabs and Muslims who face government prosecution. This is especially timely today with renewed travel bans and threatened Muslim registries.