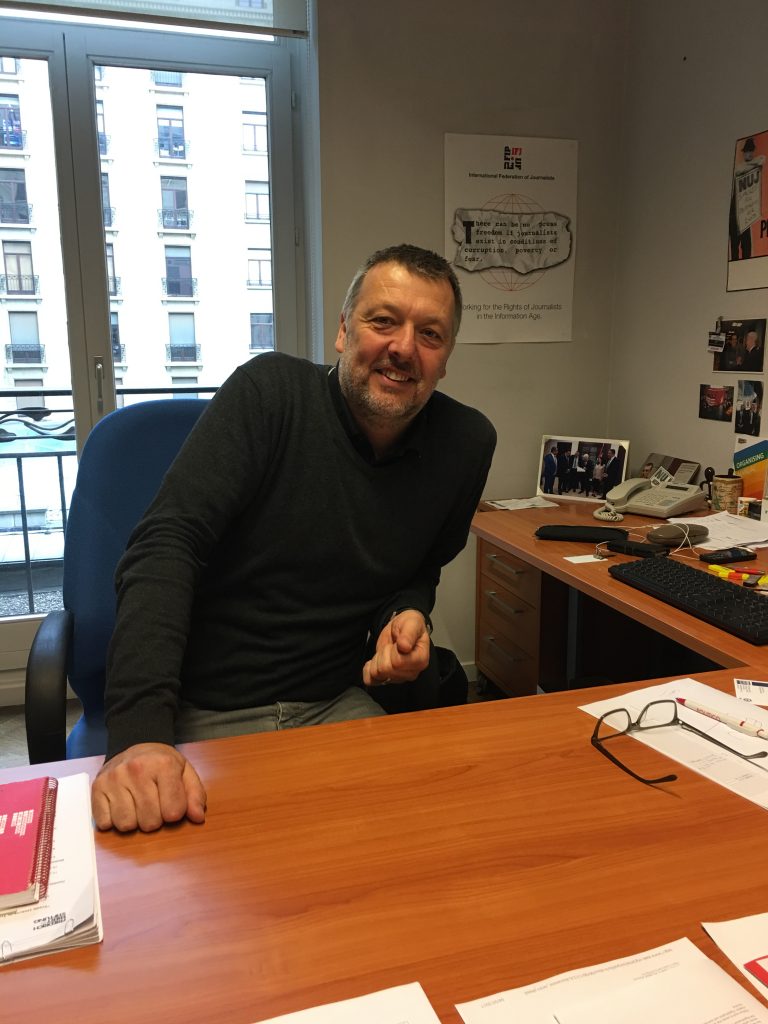 On a recent trip to Belgium, I was fortunate to meet with Jeremy Dear, Deputy General Secretary of the International Federation of Journalists. NWU is a member of this organization that represents over 600,000 journalists in more than 140 countries.

Dear points to shining examples of government support for journalists in Sweden and Germany, but states there’s room for improvement. At the other end of the spectrum are countries that don’t recognize a free press. “That includes China, though there is incremental improvement in organizing journalists,” he observes.

The IFJ was established in Paris in 1926 “to promote international action to defend press freedom and social justice through strong, free and independent trade unions of journalists.” Their mission is to ensure the rights of journalists and their ability to perform their duties without undue pressure, intimidation, torture or loss of life from government and other entities whose actions might be exposed by media attention.

In Brussels, the IFJ is housed in the Residence Palace, and sits among a cluster of EU buildings that serve as headquarters to both the European Union and NATO. Some of the 55 wounded in the ISIS bombing at nearby Maelbeek subway station in 2016 were treated in the Residence Palace, and security was beefed up in the aftermath as EU administration structures are a natural target.

The IFJ launched the Ethical Journalism Initiative in 2008, a global campaign to defend standards and raise awareness of the importance of quality journalism.

Dear looks on so-called fake news and President Trump’s statements accusing mainstream media as the source as dangerous. “He is undermining the credibility of genuine news,” he says. “And the world still looks on the US as the standard bearers of an open, transparent press.”

“We have been attempting to establish a federal shield law in the US,” I tell him. “The sticking point seems to be the definition of ‘journalist.’”

“Individual journalists, working cooperatively within their associations and unions, generating what’s being called ‘slow news’ with an emphasis on corroboration of sources rather than a rush to publish first, will aid us all,” he says, adding: “Any definition that limits press freedom or freedom of expression is something we should oppose.”

Dear’s work as an instrument of social justice continues to encounter challenges. “I’m just a bureaucrat doing the bidding of the elected members of this body,” he says. Seventy percent of IFJ’s funding comes from affiliates with the balance through grants from institutions that wish to use the agency’s research.

“I’m grateful to the NWU, Larry’s support with the UN, and Edward’s focus on copyright protection. It all helps.”

To learn more about the IFJ and its work on behalf of journalism and a free press, visit their website at www.ifj.org.