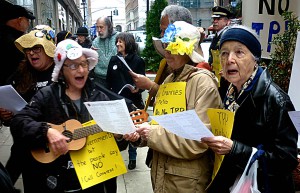 More than three-dozen activists gathered outside the New Zealand Consulate in Midtown Manhattan as part of worldwide protests February 4 following the signing of the Trans Pacific Partnership (TPP) trade deal in Auckland, New Zealand. It is the largest trade agreement ever attempted.

The treaty, negotiated in secret, gives multinational corporations the right to gut environmental, health, safety, and labor laws. This bypasses the judicial systems in any country. Unions and individuals do not have standing to sue.

Anti-TPP rallies were staged in 27 other major US cities, including Los Angeles, Chicago, Dallas, Denver, Detroit, and Washington, DC. Perhaps the largest body of protestors—about 5,000—took to the streets of Auckland, where they shut down the central business district for a few hours during the signing ceremony. Several indigenous Maori tribes refused to take part because they believed the agreement infringes upon their sovereignty.

While this agreement ties the hands of individuals and unions, multinational corporations can sue 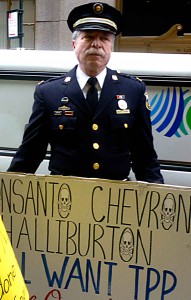 governments under the nebulous concept of loss of “future profits.” For instance, TransCanada is currently suing the US for $15 billion (based on similar provisions in the NAFTA trade agreement), claiming loss of future profits after President Obama cancelled the Keystone Pipeline.

Ray Lewis, a retired Philadelphia police captain and dedicated activist, was among those protesting the TPP, as were the Raging Grannies, who sang “Bye Bye Democracy” to the tune of “Bye Bye Blackbird.”

No doubt the hope was that having the event in such a remote country would attract little attention. It worked. Democracy Now! was the only television news program to give the TPP signing prominent coverage.

The agreement has to be ratified by all the individual governments before it is enforceable.