You are here: Home / News / Getting Writers Read and Fed! 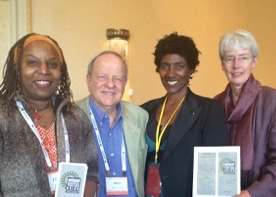 The NWU is Back at the San Francisco Writers Conference February, 13-16, 2020. The National Writers Union Northern California Chapter will be at the conference for a 4th year, and is presenting the one-hour panel, Getting Read and Getting Fed!

Topics covered will include:

The San Francisco Writers Conference was co-founded 17 years ago by Michael Larson and and Elizabeth Pomada. Larson is a member of the National Writers Union Northern California chapter. The San Francisco Writers Conference enjoys a rich literary culture. Over the course of four days in mid-February more than 500 attendees and renown keynote authors, presenters, editors, and agents will attend SFWC combining the the best of both the traditional publishing industry with the latest technology to empower authors to publish everywhere.

Additionally, the National Writers Union Northern California Chapter joins a prestigious group of exhibitors and sponsors of writers services available to the public whether or not they are registered for the SFWC conference.

From February 14-16, 2017 during most of the conference hours the NWU will be in the exhibit hall in the Ballroom Lobby on the street level of the Hyatt Recency San Francisco. Additionally, NWU authors volunteering at the exhibit can have their books sold at the SFWC bookstore during the conference.