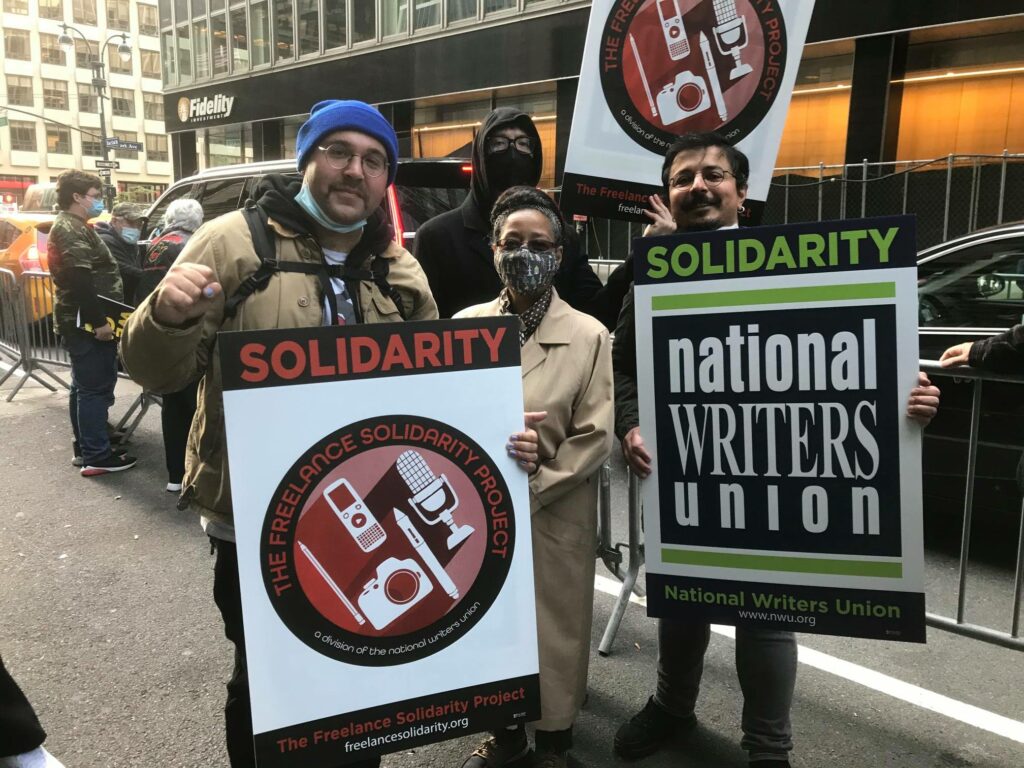 Freelancers who do business with a company based in New York are covered, even if they don’t live there.

A draft of the bill is expected by February, at which point it will go through a vote with the Labor Committee, and, if voted out, to the Senate and Assembly for a vote before June, when the legislative session ends.

NWU and FSP are working with a growing coalition of labor allies and creator organizations , including the American Photographic Artists, Authors’ Guild, Freelancers’ Union, Graphic Artists Guild, and the National Association of Science Writers as well as other labor allies in the New York Direct Coalition and the International Brotherhood of Teamsters. The bill is part of several pro-labor bills coming up in front of the New York legislature this year, including Senate Bill S8166 to improve working conditions for nail salon workers, and an expected bill to improve the working conditions for New York taxi drivers.

To ensure Freelance Isn’t Free is passed this session, NWU and FSP are joining a launch event in Albany with our coalition partners and urging its members to amplify the campaign. We’ll share a communications toolkit and other information on how you can get involved in the campaign soon.

There are more than 59 million freelancers who contribute more than $1.2 trillion to the U.S. economy. In 2017, New York City became the first jurisdiction in the country to implement a law guaranteeing freelance workers protection against non-payment and late payment under its Freelance Isn’t Free Act. Complaints filed through the law have recovered $1.8 million in unpaid fees. Over 60 percent of freelancers who filed complaints with the Office of Labor Policy & Standards had received their payment within 90 days, and 90 percent of successful complainants received the whole amount they were owed. As of the end of 2020, 1,681 unlawful payment practice cases were filed, which represent independent contractors from a variety of industries in New York City, including freelance writers and authors.

In December 2021, New York City filed the first large pattern-of-practice lawsuit on behalf of two dozen workers under the Freelance Isn’t Free Act against L’Officiel USA for the American subsidiary’s pattern of failing to pay freelancers on time or not at all. The suit is seeking a $25,000 fine for violating Freelance Isn’t Free and $100,000 in fees owed to the freelancers.

If Freelance Isn’t Free passes in New York State, it will help build momentum for similar legislation across the U.S., including a bill that is being considered in Los Angeles, which our union is also supporting.