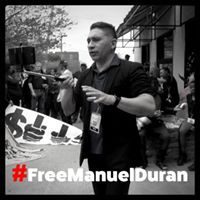 Manuel Duran Ortega is a well-known and respected journalist in Memphis, TN. A former TV station manager in El Salvador, he came to the US more than a decade ago as an undocumented immigrant after his life was threatened.

Duran was arrested by Memphis police on April 3, while covering a local immigration rights protest that took place during the commemoration of the 50th anniversary of the assassination of the Rev. Dr. Martin Luther King Jr. Despite wearing a press badge around his neck, the police arrested him and charged him with disorderly conduct and obstruction of a highway or passageway.

The Memphis police dropped the charges on April 5, and then turned him over to U.S. Immigration and Customs Enforcement (ICE). He has been held in an ICE detention center in Jena, Louisiana ever since.

The Southern Poverty Law Center is representing Duran, who many believe has been targeted for his consistent coverage of police abuse and misconduct, immigration detention centers and coordination between Memphis police and ICE. In June, ICE agents carried out two raids at meat packing plants, arresting 90 workers in Tennessee and 140 workers in Ohio. One 20-year old worker told the Guardian (6/29), “We were working in the plant and the agents showed up with machine guns and started taking everyone outside.”

NWU is proud to add our voice to the 26 press-freedom, civil-rights, labor and civil-liberties groups that submitted a letter on July 8, demanding the release of Manuel Duran Ortega. The Nashville Tennessean and The Memphis Commercial Appeal have also denounced his arrest and detention, which reflect both the war on immigrants as well as the war on press freedom being led by the White House. We call on ICE to release Manuel Duran Ortega immediately.