You are here: Home / News / Free Ahmet Sik and All Turkish Journalists Held in Jail 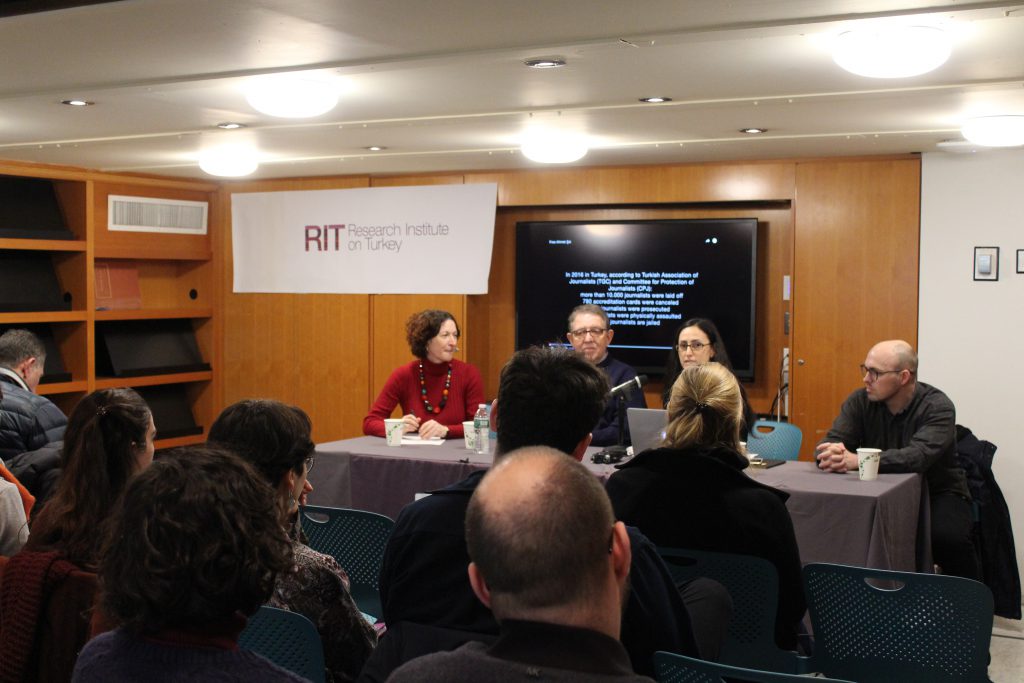 On February 3, NWU joined PEN America and the Indypendent at a press conference called by the Research Institute of Turkey (RIT), to demand the release of Ahmet Sik and all jailed Turkish journalists. Sik was arrested on December 30, 2016, and charged with spreading “terrorist propaganda” for a Tweet! He is among 144 journalists who are currently in jail since the failed coup against President Recep Tayyip Erdogan last July. The ruling AK Party launched a massive purge of the police, judiciary, media, schools and universities in response to the coup attempt. Thousands have lost their jobs and dozens of newspapers and TV stations have been closed.

Sik and journalist Nedim Sener were previously jailed in 2011-2012, and his book, The Imam’s Army, was banned and never printed. It is about Fethullah Gulen, who lives in the U.S. and has been blamed for the attempted coup by the Erdogan government.

Eylem Delikanli of RIT, gave background on Ahmet, and spoke of his visit to New York just weeks before his arrest. She also spoke about how he is getting along in prison, sharing a cell with his lawyer, relayed from his wife, who visits Ahmet once a week.

Karin D. Karlekar Ph.D., of PEN America, spoke about the extensive support work PEN has been providing, including meeting many journalists in court and organizing legal and international support on their behalf.

NWU President Larry Goldbetter said that the permanent and spreading war, triggered by the US invasion of Iraq, is the driving force behind the attacks on journalists throughout the Middle East and the U.S. (The video is here.)In 2016, 30 journalists were killed in the Middle East while doing their jobs and in Syria, Iraq and Yemen, most were freelancers under 30 years old, with little or no protective gear or safety training.  Turkey has been a major player in the war, being used as a staging area for US bombing missions, a gateway for foreign fighters to enter Syria, and ruthlessly attacking Kurdish forces who are fighting ISIS.

Current attacks on U.S. media workers bear a striking resemblance to Turkey, and this goes deeper than Trump’s “alternative facts,” or the six reporters arrested on Inauguration Day. Amy Goodman of Democracy Now, and many other reporters were arrested, threatened, and assaulted while covering the North Dakota Pipeline Access protests, as well as marches against police killings in New York and Ferguson. The Obama Administration prosecuted nine cases under the Espionage Act, more than all previous administrations combined, in an attempt to silence whistle blowers like Edward Snowden and Chelsea Manning, and stop government leaks to the press, all in the name of Homeland Security. “Obama opened the door that Trump is rushing through today,” Goldbetter said.

Peter Rugh, Associate Editor at the Indypendent, called for international solidarity and also drew on the parallels between the obstacles journalists are facing in Turkey and in the US.