You are here: Home / News / Frederick Douglass’ Alternative to the 4th of July 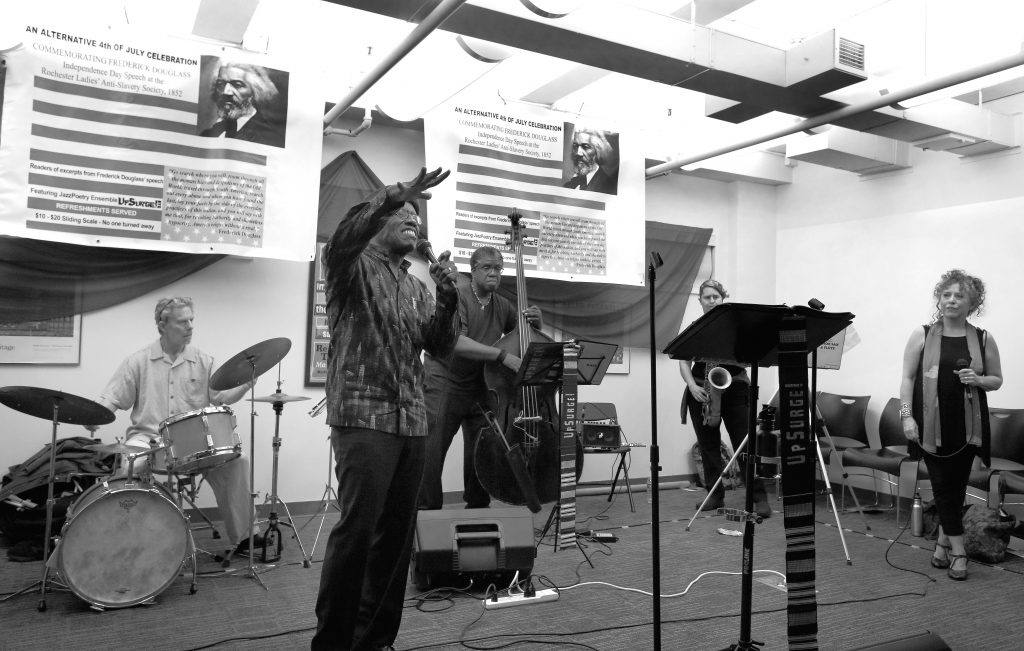 On Wednesday July 3rd a standing room only crowd packed NWU’s meeting hall for UpSurge!NYC’s Second Annual Alternative 4th of July Celebration. Raymond Nat Turner, Artistic Director/ Founder of the JazzPoetry Ensemble, UpSurge!NYC opened the evening by pointing out the hypocrisy of celebrating July 4 as a national day of independence and political freedom in this nation of continuing racial and economic inequality. “Tonight,” he proclaimed, “we are making July 3rd our Independence Day.” We are affirming our solidarity across so called racial lines and borders and confirming our determination to struggle together for a better, egalitarian world.”

UpSurge!NYC bassist Hilliard Greene set the tone of the evening with a spirited solo rendition of  “Wade In The Water.” This was followed by readers of excerpts

from Frederick Douglass’ 1852 Independence Day address of to the Rochester Ladies’ Anti-Slavery Society. His speech—spoken at a time when millions were living in bondage across the United States, nearly a decade before the American Civil War and the end of slavery—condemned America for “every day practices . . for revolting barbarity and shameless hypocrisy.”  Slavery was eventually defeated but racism and racist oppression remain. Douglass’ speech connects the past to the present. It is as relevant today as it was over a hundred years ago.

Frederick Douglas was an Abolitionist, an activist, and a leading figure in the Underground Railroad that helped enslaved Africans flee the southern states. The legacy of the abolitionist movement continues today in the nation-wide sanctuary coalition that is giving refuge to those seeking asylum on our borders.

Some of the evenings most powerful moments were the sounds of UpSurge!NYC Jessica Jones, tenor sax and flute, Hilliard Greene, bass and Lou Grassi, drums  with the spoken word poetry of Raymond Nat Turner and Zigi Lowenberg. The

the “program was a wonderful alternative to celebrating July 4th. It would be even more creative and perfect to continue to expand your speakers and awardees. I envision a broad roster of folks who have contributed to a more just society chosen to read and/or receive awards! “ She later added, “There are so

many ways this program can develop and grow. I’m already looking forward to next year’s program.”