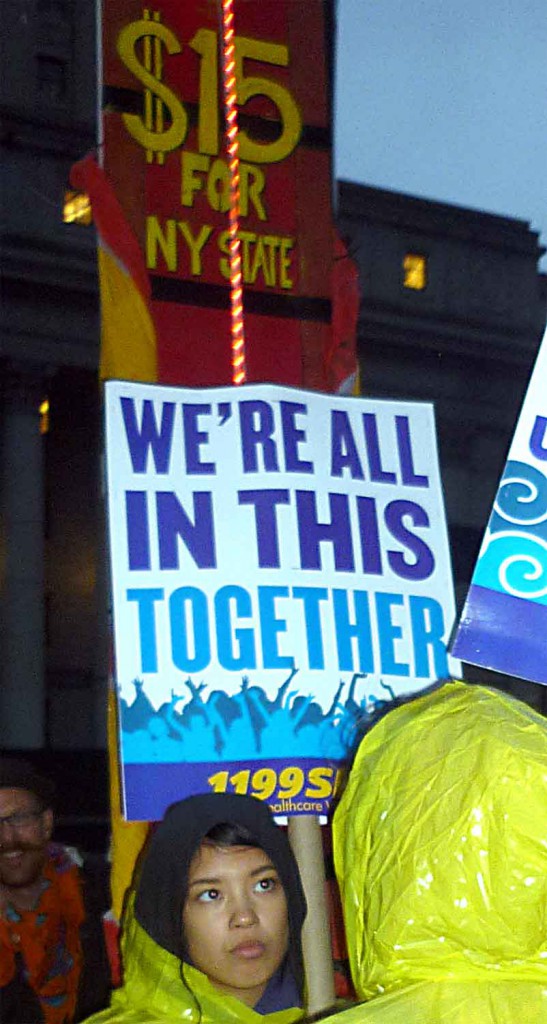 NEW YORK, November 10, 2015 – Tens of thousands of fast-food, airport, child-care, home- care and many more underpaid workers took to the streets in 500 cities across the country today, demanding a minimum wage of $15 per hour. It’s estimated that there are 64 million workers making less than $15 an hour, including hundreds of low-wage workers in the US Capitol buildings.

More than 1,200 demonstrators flocked to Foley Square in Manhattan, many of them wearing the yellow rain ponchos of the 1199 Service Employees International Union (SEIU), which is backing the protestors. Many other workers and unions are joining in the fight, including the United Auto Workers, the NWU’s parent union, and the Communications Workers of America.

In the afternoon, New York Governor Andrew Cuomo announced that he’s raising minimum wage for all state employees to $15 per hour.  He noted that low-wage employees must often rely on welfare and food stamps to survive. He said, “We’re subsidizing McDonald’s profits and Burger King’s profits. And we don’t want to be in the hamburger business anymore.”

In a rare setback, voters in Portland, ME, voted against a $15-minimum-wage proposal the same day. Opponents said local businesses couldn’t handle the increased costs.

Cuomo’s move follows the decision in July of the New York State fast-food wage board recommendation of a $15-wage floor for the state’s entire fast-food industry. The move could eventually raise the pay of hundreds of thousands of workers.

At a press conference following the wage-board hearing, one person pointed out, “The Fight for $15 has shown me what’s possible when workers stick together.” The decision will likely compel other low-wage industries to raise the rate of compensation.

Seattle, San Francisco, Los Angeles and Pittsburgh are all raising their city’s minimum wages to $15 in the next few years.

The rallies were staged exactly one year before the 2016 presidential elections. Democratic presidential candidate Bernie Sanders lent his wholehearted support to the cause, telling protestors outside the US Capitol, “You are having a profound impact. And you know who started it? You did. You started the movement.” He added, “Now we’ve got to finish the job. Fifteen bucks and a union.”

Sanders introduced a bill in the Senate last July to raise the minimum wage to $15, He said then, “The current federal minimum wage is a starvation wage. It’s got to be raised to a living wage.”

Hillary Clinton tweeted her support on the eve of the protests saying, “Fast-food, home-care, child-care workers: Your advocacy is changing our country for the better.” And yet she backs a bill that proposes a minimum wage of only $12.

At the most recent Republican debate, which was held the night of the protests, all candidates opposed raising the minimum wage. Republicans control both chambers of Congress and have, so far, blocked all minimum wage proposals from moving forward, including one that suggested a $10.10-minimum wage. They say increased wages would mean fewer jobs are created.

It is calculated that, based on the minimum wage in 1968, inflation and increased productivity since then, the federal minimum wage would be more than $26/hour today. The current state of our workforce is a stunning measure of how far the idea of American “exceptionalism” has fallen.