You are here: Home / News / Empowering Women At Work 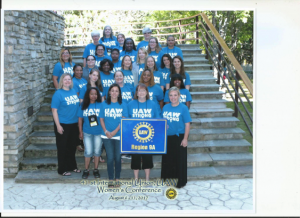 Inspired by last winter’s Women’s March, which mobilized millions, United Auto Workers (UAW) Vice President Cindy Estrada told over 300 sisters, and some brothers, that they would acquire tools to empower women within their locals during the 41st International United Auto Workers (UAW) Women’s Conference August 6-11 in Black Lake, Michigan.
The meeting’s theme, Empowering Women in the Workplace, was underscored by three core workshops, which focused on “how to negotiate contract provisions, handle a grievance, and address workplace sexual harassment,” at the Walter and May Reuther Family Education Center about four hours north of Detroit.
President Dennis Williams opened the session by praising work UAW women were already doing in their locals and in their communities as they prepare for upcoming legislative battles in Washington, DC. Attendees heard from grassroots water-rights activist and political-action leaders, and also participated in a workshop on generational differences in the workplace from 1928 to 2000.
The sisters came from Michigan, Ohio, and Indiana, but also from Alabama, Kentucky, and Texas. They were submarine engineers, apprentice electricians, machine operators, foundry workers, and diesel locomotive assemblers. Many were second and third generation autoworkers. From Region 9A, they were also legal aid lawyers, graduate students, and college staff. Julie Kushner, 9A Regional Director, and the only woman to lead a region, focused on her record of successful organizing drives with over 12,000 recent members, including workers at Harvard and Columbia, while also representing members at companies like Electric Boat Corporation and General Dynamics.
The conference sparked new ideas for NWU collaborations with UAW members in other locals: There was a lawyer who writes mystery novels; a foundry worker who wants to pen a memoir; an auto worker who’s trying to capture the history of her family in her local; and an assembly-line worker/union activist who proofreads book manuscripts for best-selling authors.
The UAW introduced a new workshop on sexual harassment called “Standing With Our Sisters.” For NWU this workshop might be part of a strategy for our campaign with the International Federation of Journalists to “End Gender-Based Violence in the World of Work.” More will follow on this campaign, but the tool kit is available here. My hope is that next year several NWU members can take this campaign to the 42nd UAW Women’s Conference.