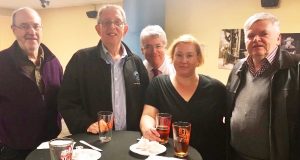 One of few remaining labor reporters, Ginger Adams Otis, spoke in early November at the 1199 Union Hall in Hartford, CT. She covers worker and union issues for the Daily News’ “On the Job” beat, and her talk attracted a large, enthusiastic audience, which included members of UAW Local 6950/UCONN Graduate Employee Union.

Adams’ most poignant observations were about how a number of union members and unorganized workers involved in job actions around the country have continued to support President Trump, despite evidence that he and his administration are actively working against their interests.

The reporter made note of workers on strike at the Momentive Chemical Plant in Upstate New York, which is partly owned by Stephen Schwarzman, a hedge fund billionaire that Trump put in charge of “Job Creation.” Under Schwarzman’s regime, wages have been driven down, health care coverage cut, and pension and retiree benefits assaulted, which has not stopped many strikers from continuing to back Trump.

Adams brought up the case of three women workers in Alabama, who took Murphy Oil Gas Stations to court for failing to pay them overtime. A few years back, President Obama’s National Labor Relations Board ruled the women had the right file a joint collective action and sided with the workers, but more recently the Department of Justice (DOJ) under Trump has reversed that decision, saying that the women had to file individually.

The DOJ now supports Murphy Oil in the litigation, which is headed to the US Supreme Court. Inexplicably, the lead plaintiff has admitted to voting for Trump, and claims she still believes he wants to help working class people.