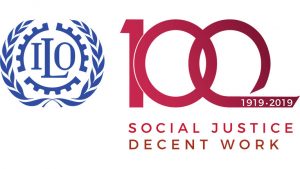 The International Labor Organization (ILO) renewed a Centenary Declaration for the Future of Work on June 21 in Geneva, Switzerland. The event coincided with the 100th anniversary of the Conference, where the organization adopted a new international Convention against violence and harassment at work, while vowing to hold governments accountable for violations.

Sharan Burrow, general secretary of the International Trade Union Confederation (ITUC), said that ILO “delivered a historic commitment” with the support of unions, employers, and governments standing together. She added that this achievement highlighted a human-centered future of work, which captures the spirit of the ILO’s mandate since its founding 100 years ago.

Borrow emphasized that the Centenary Conference reminded the world of ILO’s importance as “the oldest and most significant of all the multilateral institutions.”

THE FUTURE OF WORK

The ILO asserted that some of the newer business models negatively affect worker’s rights, earnings, and conditions under which they provide service, yet fail to hold employers responsible. The ILO agreed on a Declaration that institutes reforms in these areas, while shifting to a carbon-free economy, and keeping pace with the digital evolution of work.

Among top priorities going forward are educating and training workers. Data privacy, cross-border synergies, collective bargaining, and dialogue between governments, unions, and employers are also pivotal. The Declaration acknowledged that occupational health and safety at work must be addressed. Member organizations passed a Fundamental Rights resolution in the framework of the ILO.

The new Convention guaranteed safety at work and protection from violence and harassment, acknowledging the absence of these protections as not only a threat to equal opportunities, but also as an abuse to human rights.

The Convention defined the meaning of workplace violence and harassment and extended protection to employees, trainees, interns, volunteers and third parties, including clients, customers, and patients.

As discussed at the conference, approximately 75 percent of workers worldwide are either not adequately protected or they’re totally unprotected. The Conference Committee on the Application of Standards examined ILO member states’ commitment to offering social protections.

The committee reviewed governments’ compliance with ILO Conventions and discussed countries that are the worst offenders. The Convention will be enforced 12 months if two member states ratify it.

The International Federation of Journalists (IFJ) acknowledged the ILO Convention as an important component to labor rights, particularly in support of those who work in media. IFJ continues its efforts to adopt a UN Convention on the Safety of Journalists.

Roughly 50 percent of journalists have faced sexual harassment, online trolling, psychological abuse, and/or other human rights abuses, according to IFJ statistics. IFJ campaigns seek to end harassment and gender-based violence directed at those who work in media.

The European Trade Union Confederation also welcomed the ILO Convention, asserting that going forward the battle would ensure “that each state ratifies and puts the Convention into clear and effective national law.”