You are here: Home / News / Charlottesville – The Dogs Are Off The Leash! 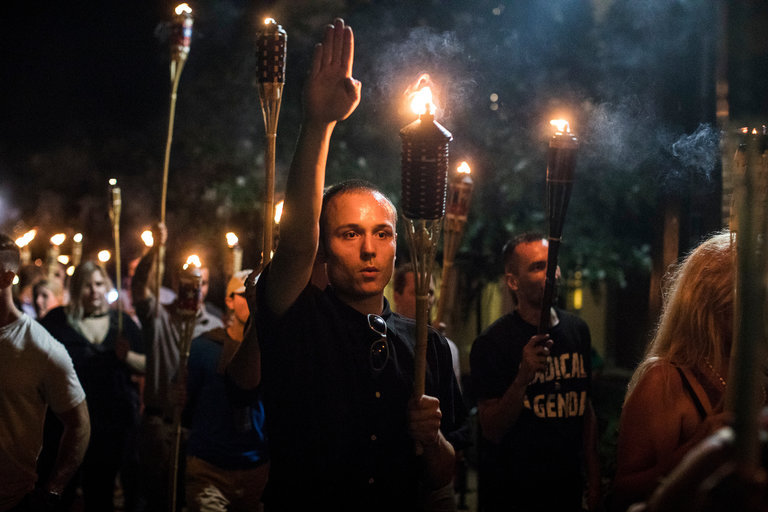 Events in Charlottesville, VA, August 11-12, starting with a tiki-torchlight parade of white supremacists and culminating in the murder of anti-racist para legal Heather Heyer, was a fascist Coming Out Party. The dogs are off the leash!

Having faced little to no police presence, they are energized and aiming higher. According to the New York Times (8/15):

These racist bottom-feeders spent the last eight years agonizing over the first black family to occupy the White House. Now, their hoods are off and they have stepped into the daylight, inspired by a President who led the racist “birther” movement, began his campaign by attacking Mexican immigrants, and started his term with an illegal anti-Muslim travel ban. They are truly birds of a feather.

And just to underline the point, rather than launching an investigation into the dramatic rise in terrorist hate crimes he is in large part responsible for, Trump’s Justice Department is seeking to identify all 1.3 million people who visited the website that was used to coordinate the January 20 Inauguration Day demonstrations.

According to The Guardian (8/15), the DoJ served DreamHost, which hosted the J20 website, with a search warrant that “covers the people who own and operate the site, but also seeks to get the IP addresses of 1.3 million people who visited it, as well as the date and time of their visit and information about what browser or operating system they used.”

Torchlight marches and cross burnings are meant to instill fear. And there is reason to be afraid. These are racist terrorists and this is not an academic debate. But fear must be overcome by love for each other and our desire to build a better world.

The National Writers Union stands with the anti-racist fighters of Charlottesville, and with the millions who oppose racism and fascism around the world. We took to the streets after the racist police murders of Eric Garner, Mike Brown, Trayvon Martin and so many others. And we have been a part of the “No Ban-No Wall” movement.

Finally, those who were injured in Charlottesville need our help, faced with medical bills they cannot pay.  Please go to this GoFundMe page and help these heroic young people heal.