You are here: Home / Find a Local Chapter / Wisconsin 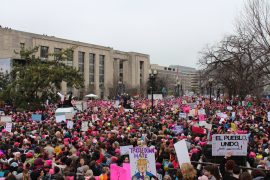 Last year at this time, most of us were depressed and/or in shock at the outcome of the presidential election. But on the day after the inauguration, the Women’s March, a worldwide protest, helped clear our heads and set us on a course to fight back. The anti-Muslim travel ban was met by thousands of […]

UPTOWN Magazine–a national publication with regional editions in Atlanta, Charlotte, Chicago, Detroit, New York, Philadelphia, and Washington, D.C. –has not been paying all of its freelance writers. Some writers remain unpaid since October, 2014. Together five writers, now represented by the National Writers Union, are owed $18,825 for work published by UPTOWN over the past three years. The NWU has tried repeatedly […]