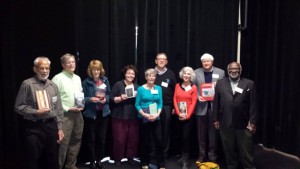 The  NWU Boston Chapter annual book party featured pizza, great conversation, and a celebration of the 17 members whose books were published in 2015. Six of the authors read enticing tidbits from their work to enthusiastic applause.

Boston Poet Laureate Danielle Legros Georges delivered a stirring keynote on the importance of poetry in American history. She spoke about being influenced by a diverse group within her genre, everyone from Phillis Wheatley to Joy Harjo to Walt Whitman. Georges referenced Langston Hughes’ “Let America Be America Again,” as a lyrical work that holds up a mirror to our nation’s inequities, while still holding out hope that US ideals can one day become a reality.

NWU President Larry Goldbetter trekked up from New York City to be a part of the festivities, and gave a rousing talk about unbalanced media coverage of primary candidates.

He arrived in the sunshine, but left in the snow: Though we moved our party date forward by two months this year to March 20—after narrowly skirting two blizzards last January—2016’s event ended just an hour before a heavy snow storm hit, marking the first day of Spring!