You are here: Home / News / ‘Beyond $15’: Possibilities in Reimagined Labor Movement 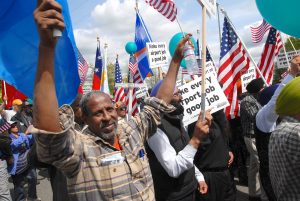 Today, all of these people would be unwelcome in Donald Trump’s dystopian vision for America. Fortunately, our nation’s official policy does not yet reflect his extremist xenophobia, so Mohamoud, Valibeigi, and Kadhim all made it to this country.

Their varied, meandering paths merged in SeaTac, WA, where they united with fellow workers, community members, and faith activists in the historic $15 minimum wage win at Sea-Tac Airport in 2013.

My new book, Beyond $15: Immigrant Workers, Faith Activists, and the Revival of the Labor Movement (Beacon Press) chronicles the stories of Mohamoud, Valibeigi, Kadhim, and other activists as they organized and wrested power from Alaska Airlines, the Port of Seattle, and other corporate and political elites.

As the campaign director for the Sea-Tac Airport workers’ campaign, I was privileged to join my colleagues and many other working-class heroes to build a labor movement that embraces a bold vision of a moral economy, which is in contrast to our current capitalist system.

There’s no question that the last year has been one of great political upheaval. The presidential campaign and its aftermath—from Bernie Sanders’s remarkable insurgency, to Trump’s brutal and ugly win—laid bare the deep alienation and pain felt by broad swaths of working people around the country. Now with Trump occupying the White House, the union movement confronts a deep existential crisis.

For labor and social activists straining to figure out a way forward in today’s reality of runaway corporate profits, mounting human impoverishment, and Trump’s racism, xenophobia, Islamophobia, homophobia, and sexism, the Sea-Tac experience points the way toward the great possibilities that exist in a reimagined labor movement.

A big part of the work ahead for activists entails bringing the vital lessons of past struggles into our present fights. I see Beyond $15 as a celebration of worker power and militancy, and my modest contribution to our collective discussion of figuring out a way forward in these turbulent times.