You are here: Home / News / AKIL’S NEXT STAGE 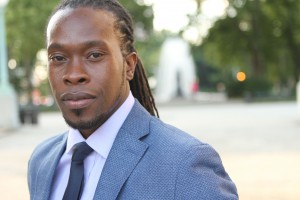 As you may know, I left the NWU in January in hopes of getting my one-man show up by fall. As the months passed, the pieces did not seem to come together. That’s when I decided to up the stakes and submit my show to two festivals. Money continued to run out with no word from either of them, so I ended up taking another day job.

As fate would have it, a couple of weeks into the new gig, my show, TRAPPED: The Weekend and the Search for LOVE, got accepted in the New Works Series’ musical category. Although reluctant to put it up in little more than a month and a half, spirit nudged me through conversations with friends and family. So, as we say down south, “come hook or crook” my show will be staged October 18th—well within my intended fall time frame.

It all started in 2004, when I told family and friends that I would not turn 30 without having staged a one-man show. My intention was to perform it once, and get it out of my system.  Well, God had a more ambitious plan:

My original piece, The Weekend: Searching for LOVE, was a collection of original songs and monologues, in which each character had less than six degrees of separation. Each character had a monologue expressing a strong desire for love. The show was so well received that I knew it would not be a one-shot deal.

Over time, the show deepened, becoming more complex with a resounding theme of self-love. I performed the shorter, revised piece a few years later in 2009.

My current production is about a man who looks for answers everywhere but within himself. A weekend journey brings him in contact with all the characters from the previous show, and introduces a new character who helps the protagonist see something that he’s been overlooking.

My hope is that the audience will not only be entertained, but come away feeling a little more self love, as I strive to do the same. –AKIL E. Pinckney