You are here: Home / News / After Cancer, Photographer is the Picture of Health 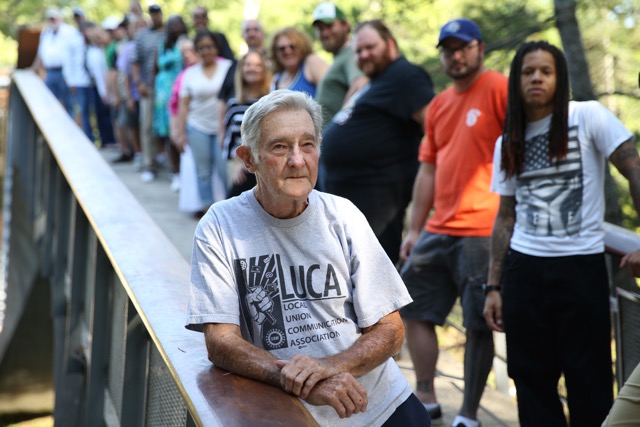 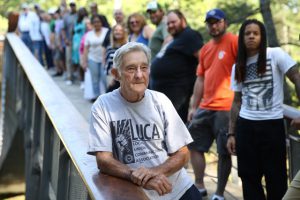 Sharon Geiselman’s powerful image of UAW members standing along a bridge (left) emerged as one of the most affecting photographs of the August 2016 LUCA Communications Conference in Black Lake, MI.

“Our theme was ‘Building Bridges, Not Walls,’ and I thought: A bridge leads you somewhere, while a wall blocks the path,” says Geiselman, who retired in 2006 from local 292 in Kokomo, IN.

She worked in GM Quality Assurance for 33 years, and currently owns and operates Snapshot Sports Photography. Geiselman arrived at the conference a week after covering Serena Williams for the US Tennis Association at the Western & Southern Open in Cincinnati.

For her photography class at LUCA, Geiseman recruited her subjects, which included Fred Taylor in the foreground as the focal point, and more than a dozen others who were slightly out of focus. They all gathered on the Japanese Bridge at the Walter and May Reuther UAW Family Education Center, a five-hour drive north of Detroit.

“It’s about the oldest pulling up the youngest,” she says, “because it’s going to take all of us working together to get this done.”

Geiselman knows about the power of pulling together. She relied on the village to get her through cancer a few years back. She attributes her survival to faith, a loving family, and a UAW-negotiated medical package. 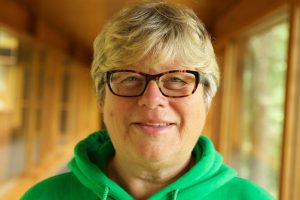 Three days after she ran a half marathon in Chicago in 2013, she was diagnosed not only with colon cancer, but also late-stage ovarian cancer. She had just finished the 13.1-mile race on a Sunday—having run her fastest time—and then on Tuesday doctors felt “a mass on her ovaries.” She was one of the 22,000 women diagnosed with ovarian cancer in any given year, from which 17,000 will die.

“I’m not supposed to be here,” she says. She believes that the reason she was spared was because God walked her through the fire, in part to raise awareness about the disease through her work with the Ovarian Cancer Research Fund Alliance (OCRFA). Unlike colon cancer, which can be caught early, ovarian cancer is usually diagnosed in its later, deadlier stages.

Along with good insurance, Geiselman benefited from Obamacare, which lifted the cap on the level of medical expenses one can accrue in a year. Her overall costs with surgery and chemotherapy were over a half million dollars.  This while “three different young women in my neighborhood, who were in their 30’s and 40s, lost their homes and filed for bankruptcy after their cancer diagnoses,” she says adding, “and they had husbands with good jobs.”

Her chemo protocol, alone, was $18,000/week for 18 weeks straight. “That was all covered,” she says. And instead of several thousand dollars for ongoing care, she pays only hundred out of pocket.

During treatment, family kept her in good spirits.

“I was blessed. My niece is an oncology nurse, and 20 family members surrounded me when I was in my chemo buzz.”

Another young niece, Chloe, did her part during Geiselman’s infusions by writing out the lyrics to Katie Perry’s “Roar,” which includes the lines: “You held me down, but I got up/Get ready ’cause I’ve had enough,” and taped it to the back of her chair.

Even at her sickest, the retired GM worker could see that some less fortunate patients had to face their crisis alone, or could not afford what it cost to regain their health. 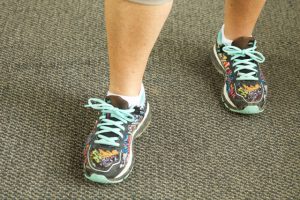 “I saw what cancer patients go through,” she says. I would tell my nieces, ‘Go sit with that woman; she has no one.’ Everybody deserves a shot at life. ”

Geiselman now serves on the board of OCRFA, pressing senators and other elected reps to earmark additional funds for research that could save more women’s lives.

“Every single day, we’re looking for funding for early detection to research this silent killer,” she says, adding, “I’m here for something bigger than me.”