You are here: Home / News / 16 Days Against Gender-Based Violence 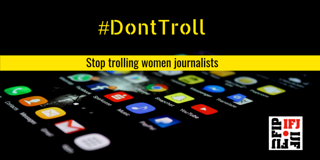 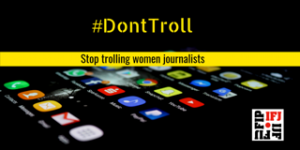 Almost two-thirds of women journalists have been subjected to online abuse, according to a new IFJ survey. Respondents reported various forms of harassment, including death or rape threats, insults, the devaluation of their work, sexist comments, being the recipient of obscene images, cyberbullying, cyberstalking, and account impersonation.

Among those who suffered online harassment, the survey suggests, nearly half of women (47 percent) said they did not report the abuse, and when they did it was mainly to their media management (40 percent), and not to legal authorities.

Another worrying result is that the majority of respondents who reported abuse, 63 percent said the attacks had psychological effects, such as anxiety or stress, while 38 percent admitted to self-censorship, and 8 percent lost their job.

As part of the campaign, the IFJ has collected powerful testimoniesfrom women journalists around the world. If you or anyone you know has been the target of online harassment, the IFJ wants to hear your story.

IFJ Gender Council co-chair Mindy Ran concluded from this and an earlier survey that  “we are failing to protect our sisters and the lack of recognition of the serious harm that online violence can cause – both psychological and in its sinister silencing impact – must be addressed at every level now“.

At the 2018 Delegate Assembly, NWU passed a resolutionto End Worldwide Discrimination and Abuse Against Women Journalists; that document has been shared with the IFJ and UAW leadership. As we prepare a survey for our membership, we will add questions about online abuse.

The 16 Days of Action Campaign began on Nov. 25, the International Day for the Elimination of Violence against Women and Girls, and will ends on International Human Rights Day, December 10. For more information about this campaign and actions your chapter can take, see the IFJ page.

Brigid O’Farrell, a member of NWU’s NorCal Chapter, is also head of our Women’s Committee.